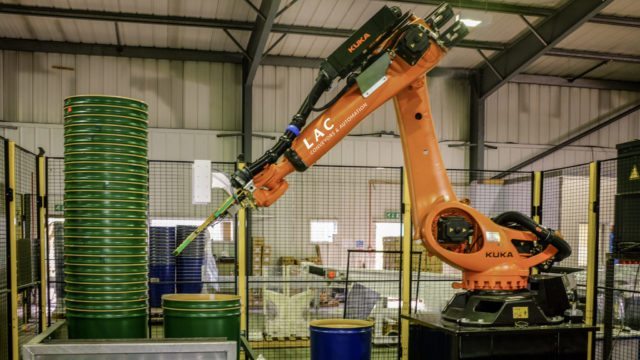 Robots are becoming increasingly used in the workplace with businesses installing more robots each month of every year. It’s important to note that there are different uses for robots with different functions they are capable of carrying out. In this article, we’re going to look at pick and place robots.

To give you an idea of the size of the industry, Statista reported that over the past decade, the global sales volume of industrial robots tripled, reaching about 400,000 units in 2018. Within the automotive sector, there are over 2,000 robot installations per 10,000 employees.

If you want to understand the functions of robotics, the way they work, and how robots carry out automated sequences, you can check out the article ‘what is robotic process automation and where is it used?‘. If you’re after automation and robotic solutions to add value to your business, L.A.C. Conveyors & Automation are providers of robotic and automation capabilities with experienced members of the team available to discuss a bespoke solution for your business.

What are pick and place robots

Pick and place robots are capable of, well, you probably guessed it, picking up and placing items on systems such as a manufacturing line, packaging line, or palletising products at the end of their manufacturing process.

Businesses install pick and place robots with the goal of speeding up the process to increase production or throughput rates and enabling automation of a process. Thanks to robots capabilities of doing repetitive tasks usually in a quicker and more accurate manner due to the reduced margin of error that’s present with a human, businesses can free up resources and staff to focus on more complex tasks that require a human element of thinking. 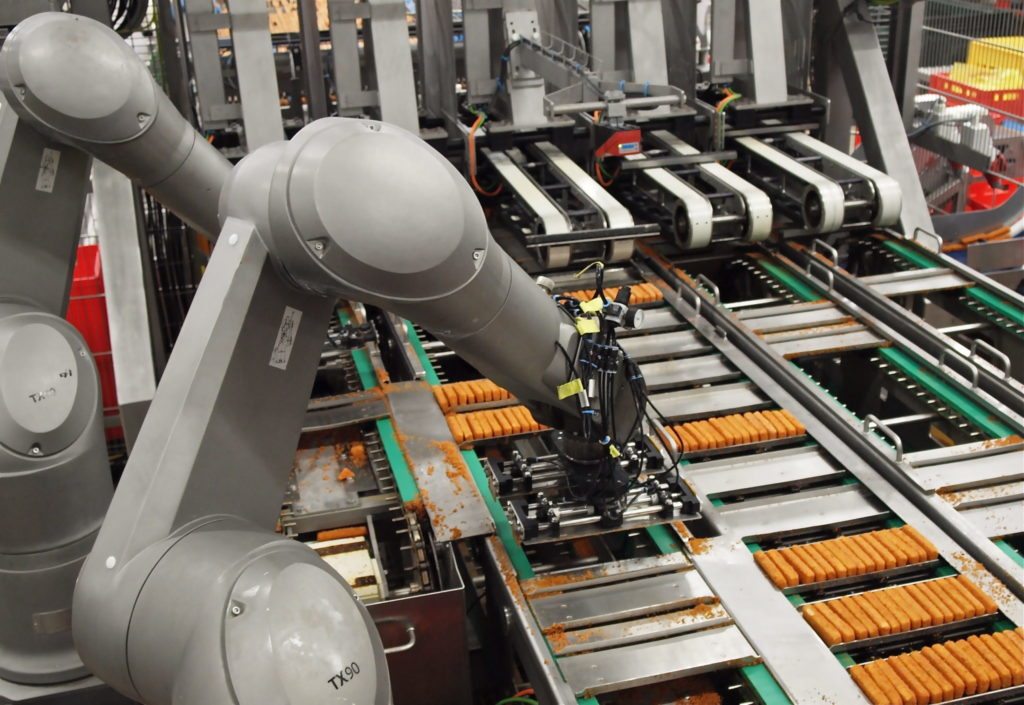 How do pick and place robots work

The concept for how a pick and place robot is simple and exactly what it says it does in the name. They pick up an item, product, piece of food, package, etc. and move it to the desired location from its original place. Robots use a technology to process what it needs to do which is called Robotic Process Automation (RPA) or sometimes referred to as software robotics. RPA is used in pick and place robots to tell them how to work and guide them on what movements they need to be doing.

As mentioned briefly above, they are typically used to do simple and repetitive tasks which include picking up an item and moving it from one place to the next, i.e. from storage onto a moving conveyor belt system. You can usually find a pick and place robot mounted on a stand, and of course, depending on the payload of a robot, it will be on a bigger stand than a robot with a smaller payload, which is strategically positioned to have a reach that is desired for the task in hand.

For example, If you have a robotic pick and place cell for the fresh food industry where it punnet sizes of fruit, you will have a pick and place robotic cell attached to the top of the frame in the conveyor process line like in the picture below. The system will likely include vision systems that enable the robots to grasp, pick, and place objects on a conveyor line or for palletise products at the end of the conveyor line. This is important as it will reduce damage and risks due to allowing the system to be accurate. 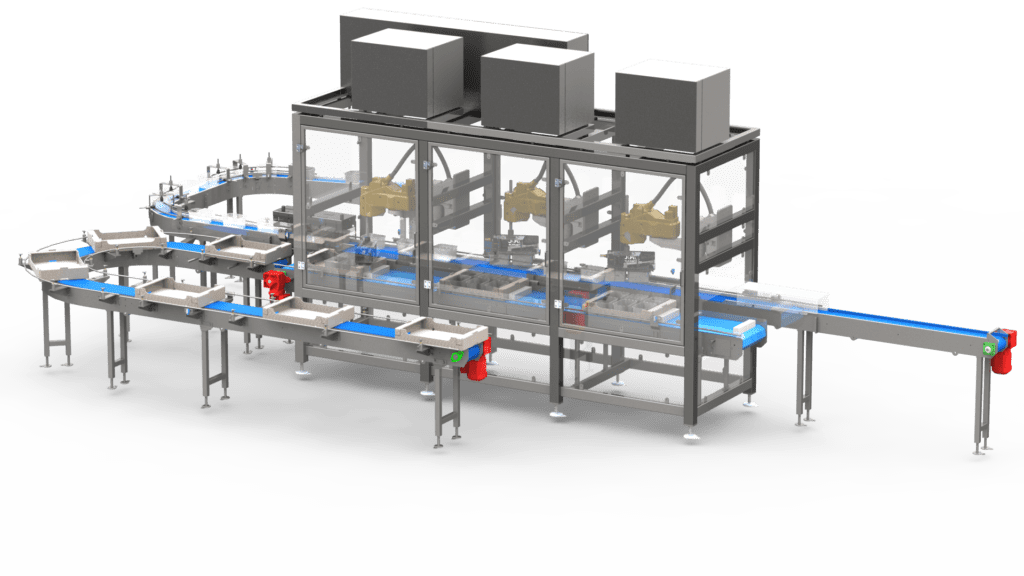 What are the pick and place robots used for?

For robotics in general, there are loads of different applications and what you need a robot to do will depend on what type of robot you use due to differentiating capabilities. For example, you can get robots that will pick and place small products or food items such as doughnuts of a stainless steel conveyor all the way through to large scale projects where there’s robotic palletising involved for units weighing in the tonnes.

During an assembly process, pick and place robots can pick up a part, product, or item from one belt conveyor and then place this onto another conveyor system. This is quite common within small electronic goods and fresh produce lines where the robot needs to do something like moving products from one production line to another.

This is similar to an assembly process in the sense that it will pick an item up but will instead package the item. So from the example used above where it will move products onto a different packaging line, this would be that packaging line with another robot(s) placing the items into packaging usually at a quicker rate with smaller individual units.

Robots that are equipped with vision systems can pick out selected items on the conveyor system or production line that match a certain description. You can get variations of how this would work such as the robot picking a selected part of a conveyor line by machine vision and it knowing what to look out for or picking out items that don’t match the standards of the production line. 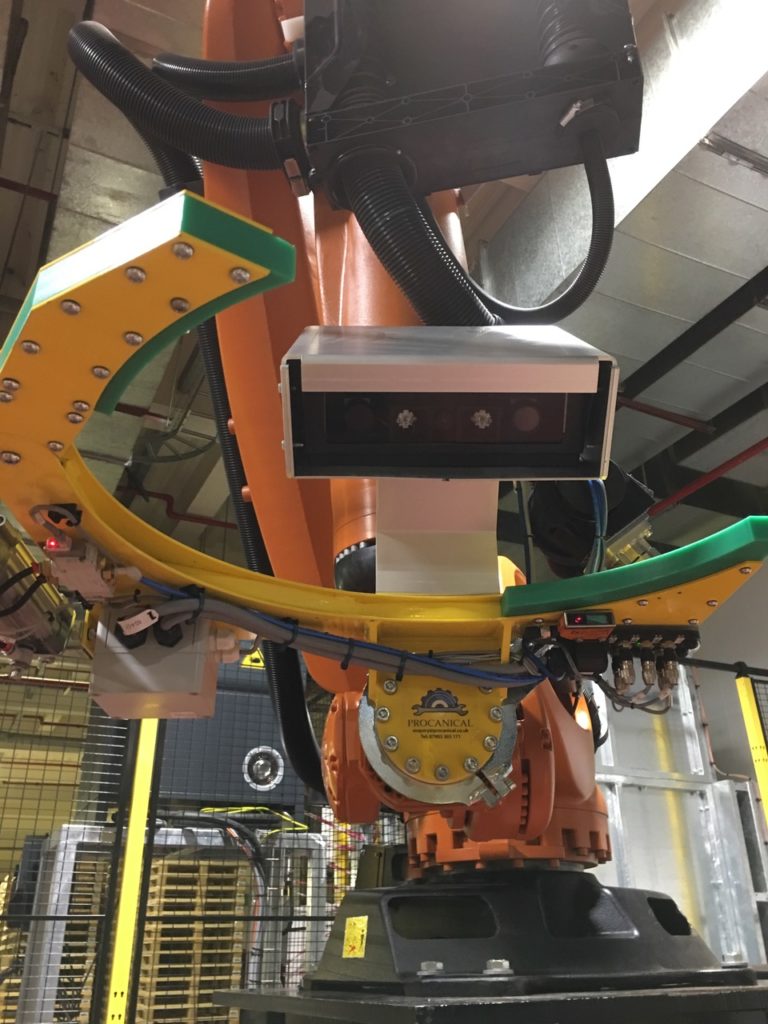 What are the benefits of pick and place robots?

From speeding up the process or manufacturing line through to reducing operational costs of the business, there is a wide range of benefits companies can get from installing pick and place robots into their system.

It’s important to note though that pick and place robots or just robotics and automation, in general, are not always needed and it’s always important for businesses to qualify if it would be beneficial for them to have robotic and automation capabilities within their workplace.

Here are a few examples of how pick and place robots can provide benefits to a business to help them enhance their customer service and improve their efficiency.

Robots are great at being consistent and accurate with what job they are assigned due to no chance of human error. Robots are programmed to do certain tasks and due to this, they will be consistent with getting that task done as they don’t get tired, don’t go off track, and don’t give any thought to what they are doing.

Getting ROI is a big benefit of integrating robots into an existing system. It’s sometimes the hardest thing for companies to see as it can be costly to install and you don’t always see the benefits straight away. However, once you get to six months, a year, 18 months, and two years, the ROI becomes increasingly evident as the time saved or increase of products which means more available products to sell and increase your profits goes up and up compared to the figures before.

Once the pick and place robotic system is paid off, the costs are usually significantly reduced to just maintenance of the system while margins are increased giving a business a more efficient, higher output, and usually lower-cost production system. 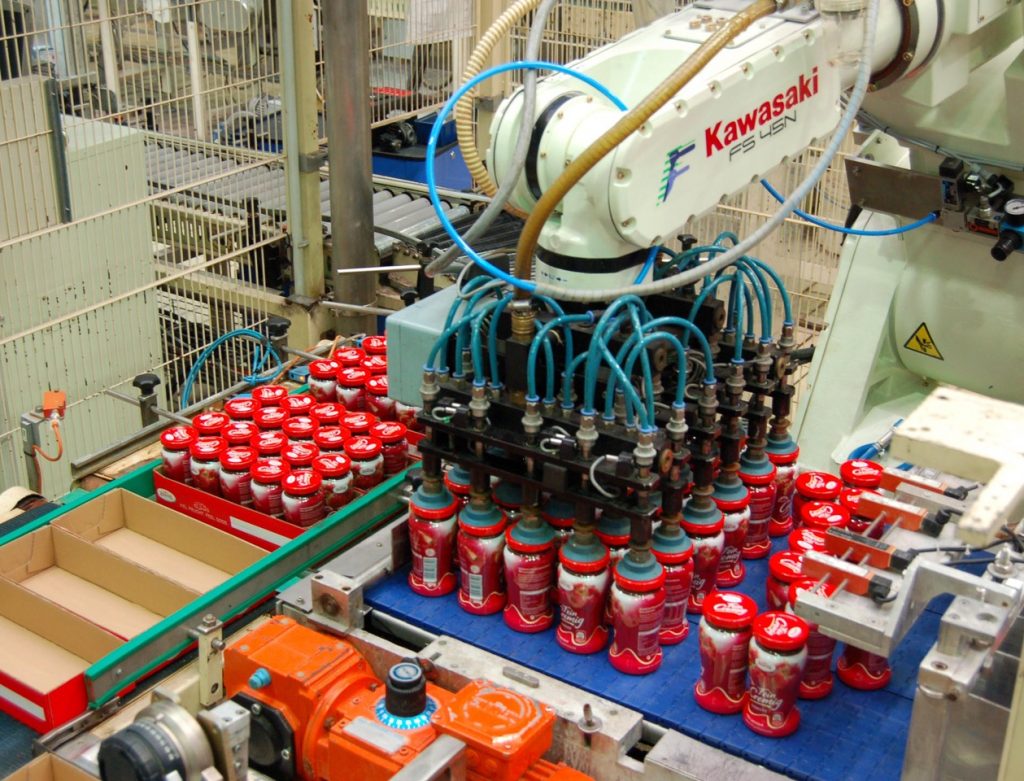 Robots, and pick and place robots in the right function, can boost the productivity of the entire business due to being quicker as discussed in benefit one and being consistent as discussed in benefit two and due to the fact they will replace the need for the human team members in that position. This frees up those team members to work on more complex systems or be upskilled to other positions allowing for harder and more complex problems to be completed in a quicker manner.

Do you need a pick and place robot?

If you’ve read this and are wondering how a pick and place robot could help your business increase its efficiency and excel, please contact a member of the L.A.C. team today where they will be happy to discuss with you a bespoke solution for your business.