Have you ever asked yourself the question ‘what is a conveyor belt?’. Well, in this article we’re going to give you an answer to that question. If you are in need of a conveyor belt or a conveyor system that includes conveyor belts, L.A.C. Conveyors & Automation offer consultations with an experienced member of the team who will listen to your business needs and design a suitable bespoke solution for you.

If you want to find out about ways conveyors can be used, there’s a great article titled ‘3 ways a conveyor belt is used today‘ which we recommend you check out to see how you could use a conveyor belt for your business.

Now, let’s help you get an answer to the question ‘what is a conveyor belt?’

What is a conveyor belt?

A conveyor belt is the carrying medium of a belt conveyor system, one of the many types of conveyor systems available today. Each conveyor system requires different modules in order to function properly and do the tasks required by the belts.

The different tasks can range depending on the weight required, the speed required, and the throughput of products on the conveyor system.

A conveyor belt system consists of two or more pulleys (referred to as drums), with an endless loop of carrying medium – the conveyor belt – that rotates around them creating a pull effect for the goods it’s carrying. One or more of the pulleys will be powered moving the belt and the material on the belt forward and along the system. 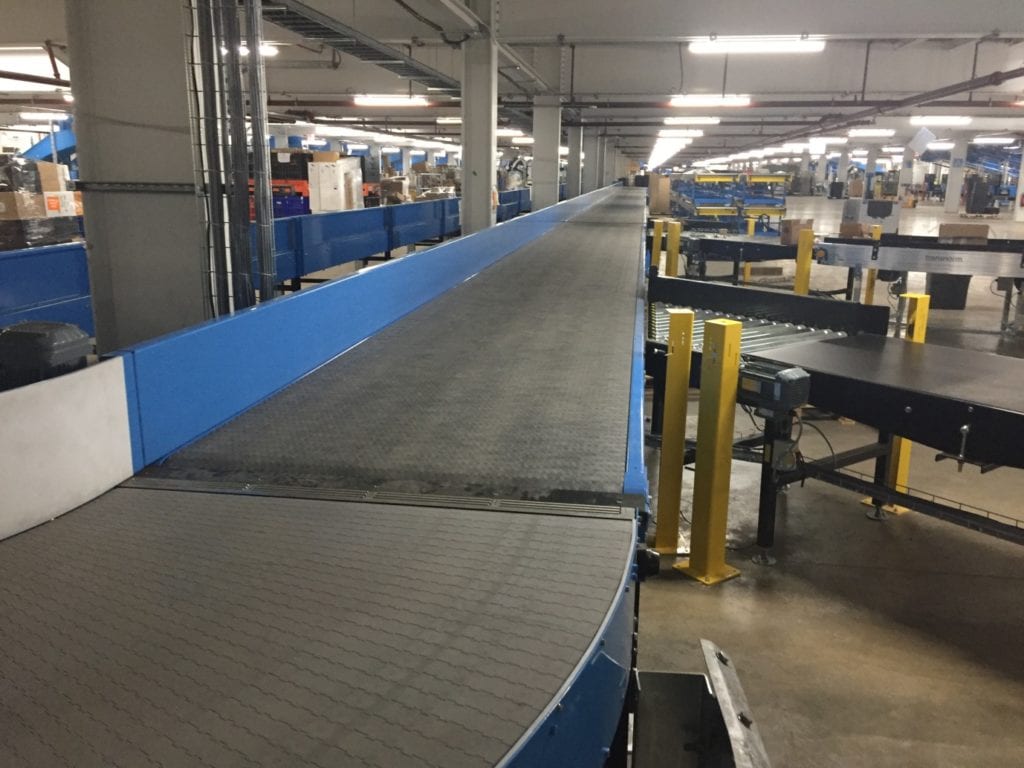 Structure of a conveyor belt

Belts consist of one or more layers of material. It’s common for belts to have three layers: a top cover, a carcass, and a bottom cover. However, there are situations where more layers are needed depending on the goods being moved on the conveyor system.

The purpose of the carcass is to provide strength and shape to the conveyor system and is often a woven or metal fabric having a warp & weft.

The warp refers to longitudinal cords and defines the running properties of the belt due to it being responsible for the level of resistance and elasticity of the belt.

The weft represents the whole set of transversal cables allowing the belt to be resistant to cuts, tears, and impacts while also being highly flexible to ensure the system doesn’t break easily.

The most common carcass materials to be used are steel, polyester, nylon, cotton, and aramid while the covers are usually various rubber or plastic compounds specified by the use of the belt.

The lower strength the material used or conveyor system installed will reduce the amount of energy consumed for operation while also increasing the product life and enhance productivity.

A fundamental part of a conveyor system to ensure the smooth running is a Drive Arrangement, which comprises of Gear Boxes, Drive Motors, and associated couplings.

On top of this, there are several parts that can be used or are needed for a functioning conveyor system.

Scrapes are used to clean the belt, chutes control the discharge direction, and Skirts are for containing the discharge on the receiving belt, Take Up assembly for “tensioning” the belt and Technological Structures like Stringer, Short Post, Drive Frames, and Pulley Frames make up the balance items to give you a full operating belt conveying system.

Within the food industry, you will see conveyors in a blue material. This means they are washable, also known as wash-downable, in order to comply with hygiene laws for food. 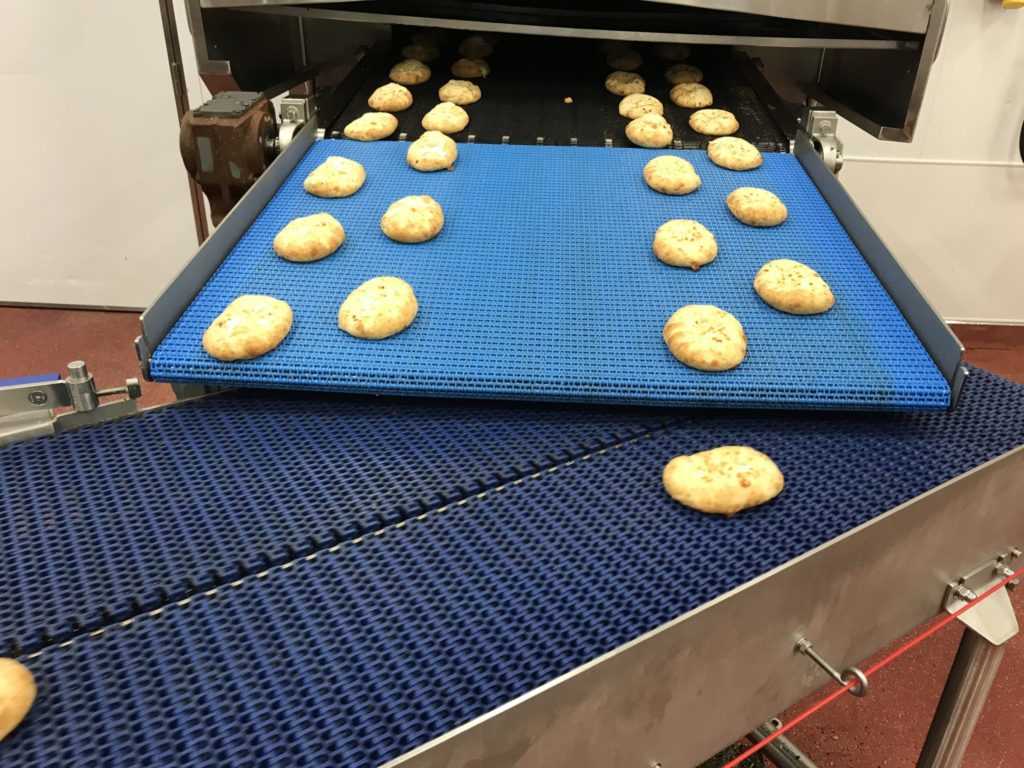 Conveyor belts have been used since the 19th century. It was in 1892 where Thomas Robins began a series of inventions that led to the development of a conveyor belt being used to carry coal, ores, and other products.

We’ve covered the history of conveyors in more detail in our post ‘3 ways a conveyor belt is used today‘. We recommend you check it out if you want to get a better idea of how conveyors have become such a sought after innovation and business solution.

There are two main industrial classes of belt conveyors; general material handling and bulk material handling. Depending on what your conveyor belt system will be doing will decide what type of belt you will need to carry your goods.

This involves moving materials, products, items across short distances within the confines of a building or between a building and a transportation vehicle like they do at a Hermes national sorting hub. These belts are used for moving smaller sized and lower weight items such as moving boxes along inside a factory or

Where are conveyor belts used?

Conveyors can be used across various industries but are extremely popular within the distribution and warehouse space as well as in the manufacturing and production industry. They are installed in places like Hermes national sorting hub and have seen massive success from installing an automated conveyor system into their national hub due to the increased throughput the systems can handle.

Due to conveyor systems being adaptive, they are able to be used in most industries due to the variation of weight, length, and items they can carry. 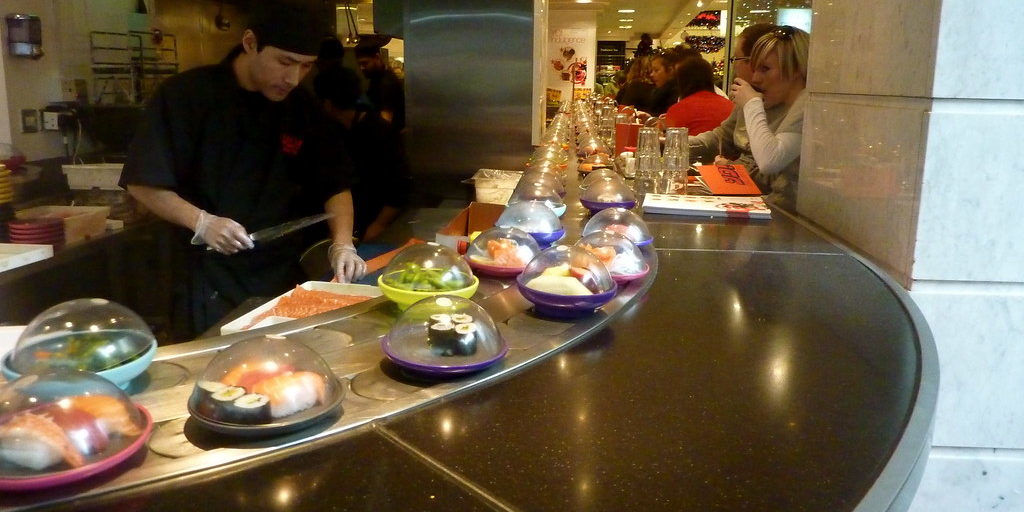 Conveyor belt systems aren’t just used for big products and carrying heavy materials though. If you’ve ever been to the Japanese food chain YoSushi you will have most likely grabbed one of your plates of the conveyor belt that interwinds round the restaurants seating plan. These type of conveyors use a rubber material to convey irregular items with small surface areas which stop the goods or plates falling between sections.

Belt conveyor technology is used in moving people in public places such as the moving isles between terminals at an airport, escalators in a shopping centre, transporting skiers up a slope, or moving your items down the line at the checkout in your local supermarket.

Why do people use conveyor belts?

Conveyor systems can be used for a variety of reasons but are mainly used for labour cost-saving while increasing throughput on a section of the production or transportation process which of course means they can get more products manufactured or sorted and sent out to customers in a quicker and more efficient manner.

Due to reduced labour being needed to carry out the task, the conveyor systems usually reduce the space required to move items, allowing the process to run in a smaller section of the facility and freeing up working space.

Belt conveyors are the most commonly used power conveyors because they are the most versatile and the least expensive while being able to carry a variety of shaped objects, large or small, light and heavy, jigged edges or square boxes.

You can hire conveyor belts for a certain amount of time, with conveyor belt hire being popular within the house building and landscaping industry where they are timed projects in a specific area where it wouldn’t make sense to install a whole conveyor system.

To make sure items can go round the system in the correct way, belt conveyors can be manufactured with curved sections which use tapered rollers and curved belting which can have additional pieces such as guards, gates, convergers, RFID scanners, and more to ensure easy access to different sections and no damage of goods. A reason why these type of systems are popular in the logistics, postal sorting, and warehouse industries. 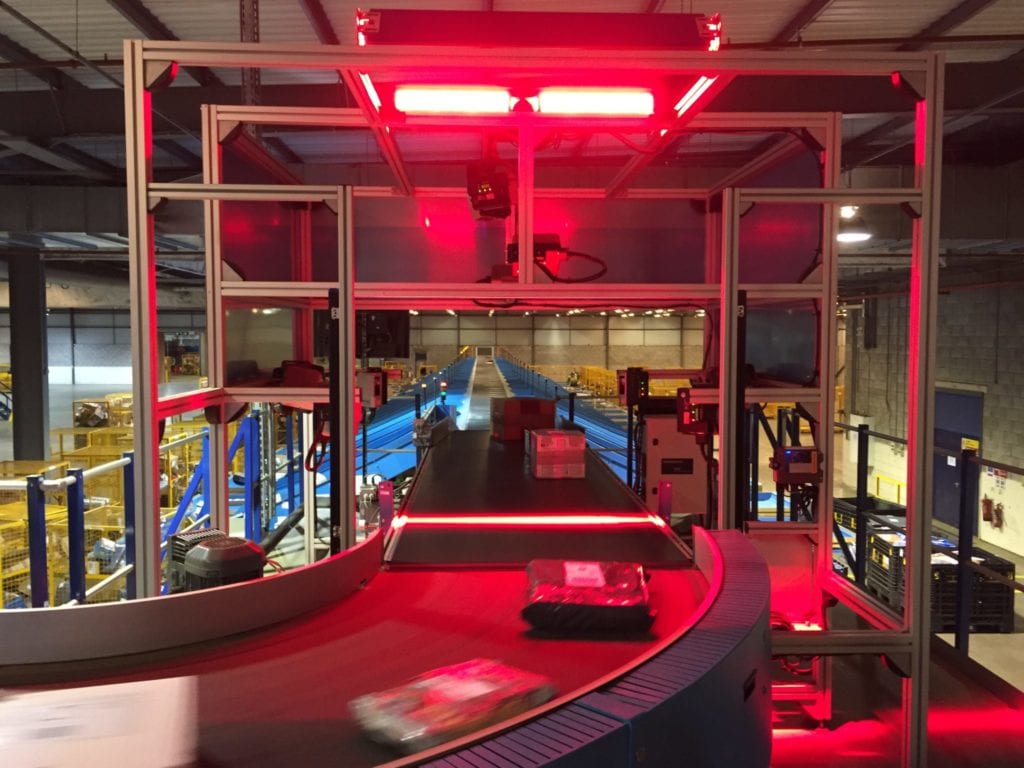 Belt conveyors can be used to transport items through elevation, another reason why companies and industries use them. If you’ve ever flown into an airport it’s usual to go through baggage collection on arrival. Have you noticed what the luggage goes round on and how it gets fed into visible sight? Sometimes you might see the luggage come down from an elevation on a declined conveyor belt.

Another example of elevated conveyors being handy is within handling raw materials. Elevated conveyor systems come in handy when moving coal, grains, sand, gold, sulfur, and many more raw materials. They can be transported over gentle slopes or gentle curvatures and this is where a toughed belt conveyor would be used.

Any types of conveyor systems carry safety risks if not properly identified, accounted for, and the safety guidelines and rules are adhered to.

Depending on where the conveyor system is used depends on what health and safety measures need to be taken. For example, if you’re moving heavy-duty goods on an incline that goes through a process of going through different sections you’re going to have stricter rules and make adjustments to ensure the products stay on the conveyor system compared to small food plates going round on a sushi conveyor belt as mentioned earlier.

Conveyors used in industrial settings include tripping mechanisms such as trip cords along the sides of the conveyor with safety start-stop buttons to ensure operators can shut down the conveyor with immediate effect if a problem arises.

To make sure you’re purchasing a conveyor belt system from a company that is responsible and takes health and safety as a paramount feature of their business service, make sure they have accreditations such as ISO 9001:2015 and have a SafeContractor approved status.

There are a range of systems that can be used and installed into a conveyor system and to safeguard them from risks and hurting an operator of the system and can allow a system to slow down or stop a system if a belt loses structure alignment. These include belt switches, speed switches, a belt rip switch, and emergency stops.

Do you need a conveyor belt?

Hopefully, by reading the above you should have a good idea for whether you need a conveyor belt and if it is suitable for your business.

If you are unsure about conveyor belts, whether it’s the right fit for your business, and how it could optimise your business for increased efficiency, contact L.A.C. today for a consultation. A member of their experienced sales team will listen to what you need and make suitable recommendations with a bespoke design for you.